We are passionate about what we do, which is why we have studied the art of malting and fine-tuned our process. 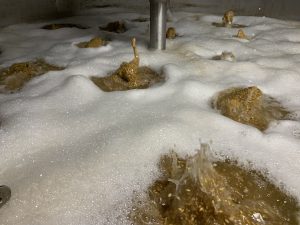 Steeping starts with raw barley or other grain that has been sorted and cleaned, then transferred into steep tanks.

Raw grain is then submerged in cool water and periodically drained, allowing the grain to rest and to respire. The absorbed water activates the enzymatic process. This process in turn initiates growth of the acrospire or sprout.

Steeping is complete when the grain has reached a sufficient moisture level to allow uniform breakdown of starches and proteins.

One visual indicator that the maltster uses to determine the completion of steeping, is to count the percentage of kernels that show “chit”. Raw barley, for instance, that has been properly steeped is referred to as “chitted” barley”, the “chit” being the start of the rootlets that are now visibly emerging from the embryo of the kernel. 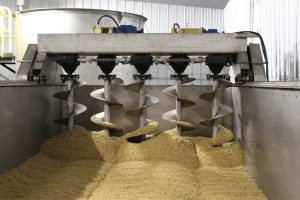 The chitted grain is transferred from the steep tank to the germination floor or vessel. Germination, which began in the steep tank, continues in the compartment where the kernel undergoes modification.

Modification refers to the breakdown of the protein and the seeds’ starch reserves. Good modification requires the barley or grain to remain in the germination cycle until it is fully modified.

Turning the grain bed periodically keeps it from becoming too warm and rootlets from growing together also know as felting. 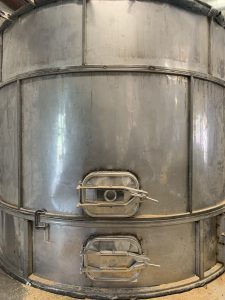 Germination is halted by drying. If germination continued, the kernel would continue to grow and all of the available sugar needed by the brewer would be used by the growing plant.

Once the green malt is removed from the germination floor or vessel, it is dried sufficiently before being kilned at a significantly higher temperature that is desired to produce the ideal base malt. Specialty malts are dried in a kiln at higher temperatures for longer periods of time.

Varying the moisture level and time and temperature of drying develops the flavor and color characteristics of each specialty malt. 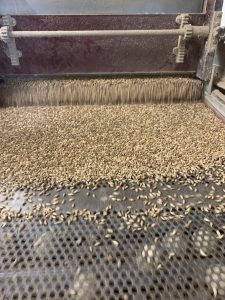 Once kilning is complete, the grain must be cleaned prior to packaging. The objective of cleaning is to remove all of the rootlets, thin kernels, and broken kernels from the finished product.